My Life as My Company's Backup Computer Guy

I had my geek hat on almost all day yesterday (figure of speech; no actual headwear was involved): I had to take the huge, high-quality color laser printer away from the receptionist and give it to New Boss in Training, then go to Staples and buy a new cheap printer for the receptionist.

To be fair, she was glad to be rid of the color laser, because of the bureaucratic firestorm and finger-pointing sessions that erupted every time an ink cartridge had to be ordered at $80 a pop (and print cylinders at $200 each). It would inevitably end in a delay in ordering the cartridges, and a delay in her getting her work done, which would usually get her in trouble.

Now that headache is no longer hers.

Anyway, most of the rest of the day was spent setting up a couple of new computers for our people — and when I say new, I mean used castoff crumbs from our High Holy Corporate Office that were too shabby to continue to disgrace their environs, but which are still better than what our people were using (one of our computers that was being replaced still had an ISA slot!) and we should be grateful to have them, and our jobs too.

Seriously, though: I took the liberty of opening up one of the units, and it was actually pretty cool: It was an IBM, and about the same size, shape and weight of the IBM PS2 that I bought in 1992. But unlike my 92 model, which I couldn’t get into even after taking out all the screws and snipping off three metal tabs, this newer model popped right open, with a hinged cover raising up from the back, and the front panel, with all its drive carriages tilted up as well for easy maintenance. The unit was still awfully small, meaning it could only hold one disc drive and one hard drive, the hard drive is SATA (meaning the cable is smaller than the standard ribbon cable) and the floppy ribbon cable is paper-thin.

Everything was so tiny (at least compared to my 27" Antec case, which gives me plenty of room to move around), it was downright cute, just like a kitten.

Anyway, I finally got the first one installed today; there were problems with transferring the email backups, and it was a total mother-duck having to crawl under the desk and work with the too-short cords on the back of her old computer.

It occurred to me that when I was studying for my A+ certification, there was no mention of how much PC technicians have to roll around on dirty carpet. If being a geek were like being a Boy Scout, we'd have a special merit badge that showed the underside of a desk, on a background of office carpet.

Anyway, I finally got it done today, which was good because NBiT was on my back about it, and I only had a couple of hours a day (when the user was at lunch or gone for the day). At three today, when the end was almost in sight, my department manager suddenly wanted to go over a project with me, and I told her I HAD to finish this today, and she said what she had would only take a few minutes, which blossomed into a quarter.

I'm not exactly sure what it was we went over, because I still had my mind on the computer transfer.

Gotta keep your eyes on the prize.

Anyway, my geek streak continued this morning, when Outgoing Boss had me take his vacation pictures off his wife's digital camera and burn them to a disk.

Such is the life of the backup geek ...

(PS: Thanks much for reading my post -- now visit my blog! Or my other blog!)

We are going to need a lot of activity from new bloggers in the next 30 days to reach our original goal of 100 posts by 100 bloggers in 100 days. Currently, there are 50 members on the 100 Bloggers team, but only 26 have posted. Today is Day 70 of the effort. Our deadline is December 30.

All You Can Eat Pickles 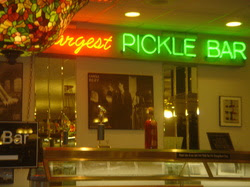 All you can eat pickles with every meal! Check out this blurb at Seth's Blog.

The death of a Genius 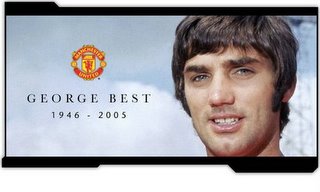 Cardboard Box Added to the Toy Hall of Fame

I think this is the coolest thing: hat tip to Kevin Eikenberry for pointing it out.

Forget the fancy toy: The box it comes in can be much more fun. Spaceship, castle, haven to daydream in, the cardboard box was enshrined Friday in the National Toy Hall of Fame along with Jack-in-the-Box and Candy Land.

"I think every adult has had that disillusioning experience of picking what they think is a wonderful toy for a child, and then finding the kid playing with the box," said Christopher Bensch, chief curator of the Strong Museum. "It's that empty box full of possibilities that the kids can sense and the adults don't always see."

Low-tech and unpretentious it may be, but the cardboard box has fostered learning and creativity for multiple generations - a key qualifier for inclusion in the museum's seven-year-old hall of fame. And its appeal as a plaything or recreational backdrop is universal.

My own best memory? Flattening those bigger cardboard boxes and using them as slippery sleds down grassy hills in the summer. Maybe not exactly the learning creativity Bensch means, but wild and wonderful FUN, scrapes, bruises and all.

What did you do with your cardboard boxes?

This is a copy of a genuine advertisement for a new Doctor at a GP Practice in England that I worked with in 2003.

It makes me remember that sometimes we have to try ‘non-traditional’ approaches to get staff in a competitive market for rare skills.

This advert appeared in the British Medical Journal - the most prestigious medical publication in the United Kingdom.

The good news was more doctors applied than expected. It tells me there are always alternative ways to do things - and they often work.


TORQUAY, DEVON A lazy, full-time Partner is required to join a burnt-out team of five disparate partners in a backward-looking practice of 11,000 heartsinks from July 2003. We are located in a dismal part of the country, with failing schools, zero culture, and miles from London. Partners’ problems include alcohol abuse, female sexual dysfunction and financial impropriety. A one in one out-of-hours rota. Well below average income. Notes, if made, kept in a state of the art shoebox under the bed of a partner’s mistress. Awful links with local “Murkton Moor” style DGH. If you share our grave concerns about this new confounded 1966 contract, and would like a more accurate practice profile, then please contact:- Mrs Yvonne Bagg (in name and nature), Chilcote Surgery, Dewerstone Practice, Hampton Avenue, St Marychurch, Torquay, TQ1 3LA.

Over dinner last night, I was told that the UK's National Outsourcing Association(NOA) runs their own IT infrastructure. In-house.

ChangeThis has just made available my manifesto The life cycle of the creative soul. Those of you interested in the creative side of the soul may find it a pleasant reading.

You can find the manifesto here.

Not sure about anyone else, but my year is winding down now. I've completed all of my year-end reviews, and all that's left are the compensation discussions.

Now that I've had a chance to reflect on the year, I realize that we've had a great year, and that 2006 will bring even better stuff.

Yes, a new carnival starts this week on the Third Age Blog. It will rotate amongst volunteers each week thereafter.

The current schedule can be found here.

If you look closely, you should recognize one or more of the bloggers with a posting in the first carnival when it comes out on Tuesday.

I've been a bit stymied on what best to write here at 100 Bloggers.... what's relevant or appropriate, what do people coming here want to read, etc. All the regular concerns and vanities of a blogger.

But it's a great opportunity, to have this open space, and I owe it to the community here to engage and enroll in the project, if I've accepted the invitation as a writer.

To stay quiet and on the sidelines, or sidebar, of this project - then what's the point? So, to jump in, rather than to only observe the experiment:

Sunday's business section of my local newspaper had an article on how companies are now monitoring blogs as part of their marketing, PR and consumer/customer service activities. Blogs are now being seen as another media source for companies to monitor and respond to.

As I'm seeing it, the opportunity - as individuals, communities, or businesses - that blogs ideally offer us is yet another way to engage and connect in ways that enrich and improve our world.

After sending some friends links to the leather pants auction on eBay, I received these responses.

From my friend Chris:

I remember when [name of guy we went to high school with who we thought was really cool at the time] bought leather pants. So, I bought leather pants. I think I wore them twice. The first time, I walked by my father while wearing them, and heard, "What the....J***s...Go****it!" It didn't feel good, like when I made them mad by wearing the old army coat and ripped jeans. It felt like I'd failed my father by not really being a male.

A similar memory was when I was too shy to tell [name of "new wave" hairdresser I made everyone go to] not to do what he wanted with my hair. In addition to being two-toned (my fault), it was about 8 inches high and curled. He kept saying, "We're going to really punk you out today!" All the way home, I kept trying to mash it down (in my Datsun 210). But it would just spring back up. When I got home, my mother had a very, very angry look. I think I just mumbled, "Don't start," and headed for the shower.

Youth was wasted on me.

I introduced Chris--along with many of my friends--to the hairdresser in question.

From my friend Tim:

I will always remember the faux leather pants and sleeveless shirt outfit you helped me pick out at Chess King that time - ouch! I actually wore them once to high school -- what the HELL was I thinking?!

I would feel more mocktacular about this had I not been photographed going to the only local authentic punk club at around age 19 wearing an enormous kelly-green satin bowtie. I don't know why I thought that was cool. It was not.

Cross-posted at These Days, Just Half-Mad.

Is everyone talking to George?