I've been deeply involved in a local campaign for state house rep, trying to unseat the incumbent whose only successful legislation has been to name the chanterelle "Missouri's Official State Mushroom."

By all that is holy, how can that be? I've walked in the woods mushroom hunting since I was a kid, looking for this magical sight: 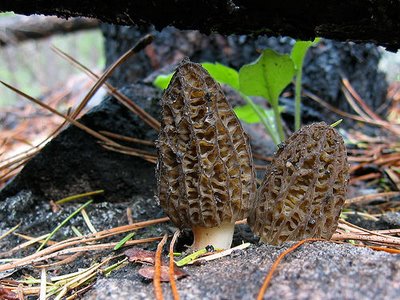 Furthermore, I've lived in Missouri my entire life, majored in horticulture at one point, and still, I wouldn't know a chanterelle if it sliced itself up under a flashing neon grocery sign and sang "Blue Suede Shoes." But I've hiked for hours, with a cranky toddler, a migraine and a stone bruise, for a plate of morels.

I am not alone. From The Missourian:

… three mushroom-hunting legislators on the Tourism Committee questioned the proposal, which was expected to be noncontroversial. “To make this the state mushroom when everyone in this room has heard of the morel would be a travesty,” said Rep. J.C. Kuessner, D-Eminence. “I just can’t believe that we’d do something like that to our public citizens of the state of Missouri.”

It was a travesty, and I, too, can't believe what's been done to the public citizens of the state of Missouri. With life and times as they are, the travesty is that anyone had time for any of this nonsense.

Important things are at stake. Be sure to vote Tuesday.