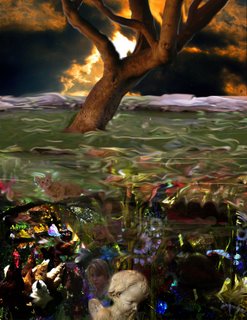 There's the life we see, and the one we don't. Humans have depths of kindess and blind spots of ignorance co-existing within the same brain.

If you suscribe to the popular old saw that insists there are just two kinds of people, I'd help you make your case. Type A or B. Elvis or the Beatles. Religiously dogmatic or freethinking. Liberal and conservative. Frightened by violence, thrilled by it. Sanquine or activist. Liver lovers and liver haters. Them what spell and them what cain't.

Take the left and right brain discussion. In case you can't keep them straight, the left brain folks are better at logic unfettered by unquantifiable emotion, while right brainers are more feeling, verbal, and creative.

Artistic people, especially the genius sort, have long been associated with mental illness. After all, how many accountants lob off their ears? But I've never seen a correlation drawn between everyday happiness and hemisphere dominance.

Kathy Sierra, Girl Genius behind Creating Passionate Users suggests that angry, negative people can be bad for your brain. Artistic sorts, especially the genius variety, have long been associated with addiction and mental illness--proven seeds of discontent. On the other hand, how many bookkeepers cut off their ears?

But Kathy draws a connection between the left brain tendency for logic and a greater sense of well being, while pointing out that the creative right brainers labile emotional responses to life lead to unhappiness.

So, we creative sorts suffer persistent existential angst. But there's an interesting component in the mix from another source altogehter. Turns out that creative sorts have more and better sex with more partners over the course of a lifetime. If I have to be unhappy as a price for my neurology, at least I'll be well and properly laid.